How am I and a neutrino similar? (insert awkward pause) Because we’re both constantly penetrating your mother! Ba-zing! But seriously, neutrinos are subatomic particles that don’t interact with other particles meaning they whizz through space and matter (including your mom) until they chance upon a photon in the wrong place at the wrong time and BAM they send off a spray of muons which create light which is exactly what the ICECUBE experiment at the South Pole is looking for. 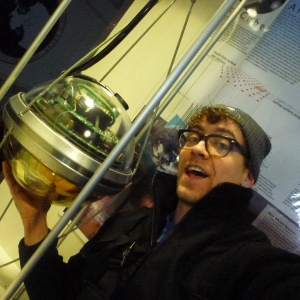 ICECUBE sees these events with 5000 of these DOMs, or digital optical modules, buried in a 1 cubic kilometer array deep below the surface of the ice. The DOMs have a photon amplifier on the bottom that sees the tiniest bits of light thrown off by the neutrino events in the crystal clear ice and converts that light into electricity which follows the cable up to the surface and up those big shiny cylinders on either side of ICECUBE (pictured at the top of the post.) 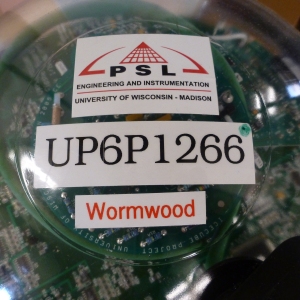 Each one of these DOMs was lovingly named (one is called russophilia, one is michael_myers) before being dropped down a ½ mile deep hole drilled with hot water to be frozen there forever. Once they’ve been deployed they can’t be brought back up if they malfunction, but since the project was completed in 2011 only 100 of the 5000 havce died (most during a power outage of about 4 hours which caused many of them to freeze.)

Each one of those DOMs has a cable that ends here in one of ICECUBE’s servers which process the signal and turn it into a visual representation (pictured below) of the neutrino blasting into a photon under the ice. Every cable has to be almost exactly the same length to prevent any sort of relative delay between DOMs so they can paint a clear picture of the energy level, speed and direction of each neutrino event.

The high energy neutrino events that ICECUBE is interested in come from through the earth, and thus from a source not from this world. Neutrinos are created from super high energy events like black holes, or nuclear fusion in the sun and can tell us about where in our universe these things are happening because, unlike most particles, neutrinos are unaffected by gravity or magnetism and thus travel in a straight line through the universe. 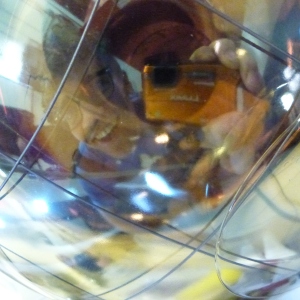 Being the self absorbed hipster that I am, I turned this quarter billion dollar experiment into an opportunity for a selfie, reflected in the bottom of a DOM. If you’d like to learn more about ICECUBE and get a much more scientific explanation of what they’re doing down here check out their website. I’ve only got 1 more week here at pole so I’ll post once more before I head back to the real world and start another adventure!